Last year the PCB West conference held a lively panel discussion about data transfer formats for PCB design and manufacturing. Most panelists and many audience members were enthusiastic about IPC-2581, a vendor-neutral, “intelligent” format that can potentially replace many of the various formats in use today. At this year’s PCB West September 26, 2012, two representatives of the IPC-2581 Consortium updated the progress that’s been made towards this emerging standard.

Here’s some quick background. The venerable Gerber format can transfer image data to manufacturing, but it can’t transfer stackup data, materials information, design intent, or netlists. Therefore, PCB designers typically ship multiple files in multiple formats to fabrication and assembly houses. One attempt to create a more inclusive, intelligent format was ODB++, but since the 2010 acquisition of Valor Computerized Systems by Mentor Graphics, that format has been owned by Mentor. Thus, there’s a renewed push behind IPC-2581, which was originally released in 2004, as a PCB CAD vendor-neutral format.

Cadence led the effort to create the IPC-2581 Consortium, which now includes 36 members including PCB CAD provider (and Cadence competitor) Zuken. This year’s PCB West update was provided by two leaders of the consortium – Gary Carter, manager of CAD engineering at Fujitsu Network Communications (below, left) and Hemant Shah, product marketing director for Allegro PCB products at Cadence (behind podium). 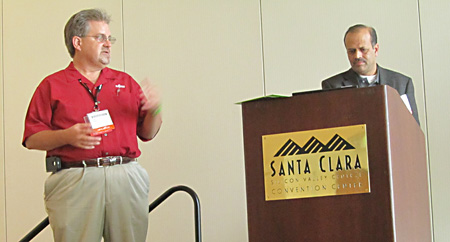 Carter provided a user view of the problems driving IPC-2581. “As we get ready to go to fabrication and manufacturing, we’ve got a myriad of data files and drawing and information,” he said. “We have to make sure all these instructions are clear and concise and that these data formats contain one single version of the truth.” That is a very difficult and inefficient task, especially with multiple versions of files in different formats.

So why IPC-2581? “It’s an open, vendor-neutral format and I think that is the key difference,” Carter said. “It doesn’t have an owner, it has a steward.” Here are some other advantages he cited:

Shah noted that IPC-2581 has had a “chicken and egg” problem because for a period of years, nobody was producing or consuming the data format. One objective of the consortium is to break that cycle. “It’s a consortium of the design and supply chain from beginning to end,” he said. “Its goal is to accelerate the adoption of IPC-2581.” Today, he noted, the consortium has 36 members, and some of them are producing IPC-2581 (including Cadence and Zuken) while others are consuming it.

The IPC-2581 Consortium has three working groups. The Why IPC-2581 group, headed by Carter, develops proposals and works with the IPC to extend the standard for new technologies and methodologies. The Technical group, headed by Ed Acheson of Cadence, validates that IPC-2581 files produced and consumed by tool vendors are complaint with the standard. The Awareness/Promotion group, headed by Shah, increases awareness through articles and events.

Earlier this year, the Technical working group produced a validation matrix showing that test case data produced by Cadence and Zuken has been correlated and validated against proprietary technology formats by several companies in the PCB manufacturing ecosystem. For more information about that, see my April 2012 blog post.

More recently, on Sept. 14, the consortium announced the first PCB built using IPC-2581. It’s a 12-layer, plug-in optical module that’s in production at Fujitsu Network Communications. “Having all the data in one file, validated and produced at the same time, resulted in a tremendous efficiency gain,” Carter said, noting that there was about a 30% reduction in set-up time on the manufacturing side. The board was shown at PCB West.

An audience member asked about Mentor’s position with regard to IPC-2581. “I understand Mentor will accept IPC-2581 in their manufacturing cycle. They recognize customers are asking for it,” Shah said. A Mentor representative in the audience added, “we’ll take that step and we’ll see. This is a good effort. At the moment we have an alternative [ODB++] that has been validated, but our goal is common. We have two formats that will replace the old stuff, and the benefits are the same.”